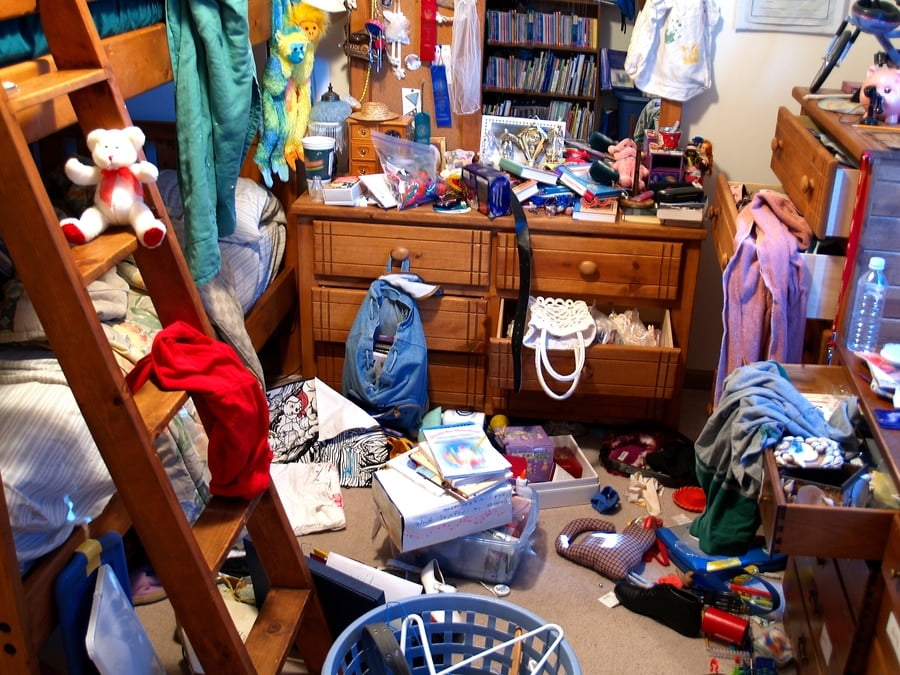 A phrase we have most likely all considered at some point in our lives… usually when we’re in the middle of a distinctly un-tidy situation!

And in recent years, the topics of cleaning and de-cluttering have even featured in the NYT best-seller list…

Because tidying has been linked with both good and bad outcomes.

On the one hand, good cleaning habits have been linked with improved mental and physical health.

It has even been claimed that our cleaning habits can impact our diet, our sleep, and our relationships.

On the other hand, excessive cleaning has been linked with more problematic issues such as anxiety, hoarding, ‘germaphobia’, and Obsessive-Compulsive Disorder (OCD).

And more often than not, these effects are rooted in childhood.

So how do we strike a good balance for our children?

Judy Batalon, author of White Walls: About Motherhood, Daughterhood, and the Mess in Between, has documented the extreme implications that a cleaning regimen (or lack thereof) in childhood can have on adulthood.

Her mother’s hoarding severely affected her as a youth.

‘Report cards were lost in her maelstrom, and so was I. I felt unseen, devoured by her disorder, trying to find room for myself to grow.’

As is often the case, as an adult, Judy embraced the opposite approach to her living space, believing that being free of ‘stuff’ would enable her to be ‘calm and open to love’.

But her impulse to tidy and de-clutter become compulsive and oppressive.

Naturally, this is an extreme circumstance. But it does highlight the impact that childhood habits can have on adult life.

When Judy became a mother herself the two extremes of her experiences became most apparent — how can she avoid these extremes with her own child?

She consulted with varying childhood experts.

One group — The Parent Encouragement Program — specialised in teaching parents how to teach their kids to do chores.

Their research suggested that pre-schoolers who had enforced cleaning duties had better relationships, greater academic success, and less drug use in their 20s.

But other findings were conflicting.

There was no proven correlation between kids keeping their space tidy and their ability to lead a functional, goal-orientated life.

Furthermore, Alan Kazdin of the Yale Parenting Centre said that ‘it’s normal for adolescents to be super messy’, and when it comes to trying to enforce teenagers to clean their space, it’s potentially more important for them to have their own areas that are under their control.

These findings just serve to reinforce the one thing we always advocate — balance and moderation.

But a rigid enforcement of cleanliness can become a form of procrastination and distraction, and a source of anxiety.

Fowler, P, ‘How Cleaning and Organisation Can Improve Your Mental and Physical Health’, Shape, 2015

Davis, S, ‘Regular Cleaning is Good for Your Heart and Soul’, The Huffington Post, 2013