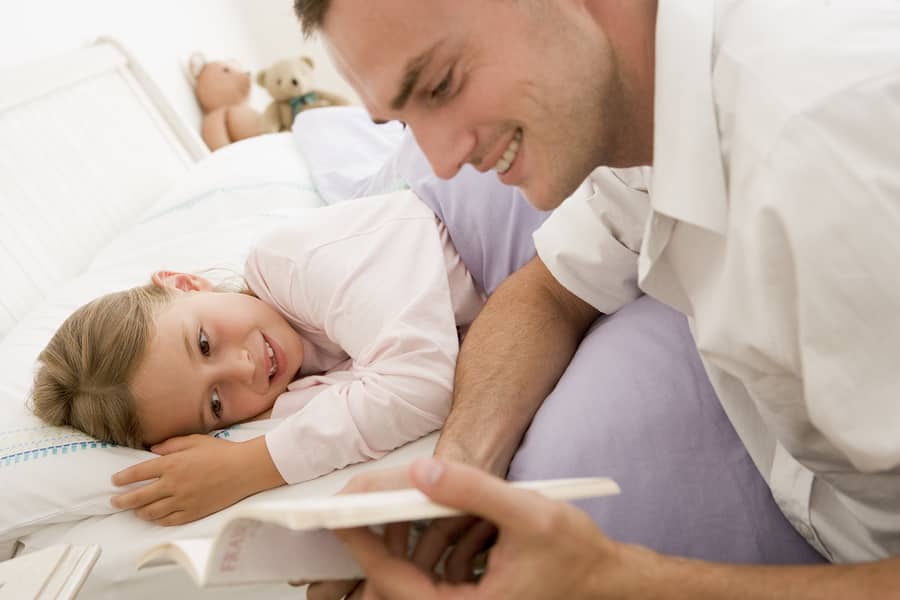 Reading is vital for developing literacy, a good vocabulary and a vivid imagination.

But with increasingly interactive electronic books that enable independent reading from a younger and younger age, we may be losing sight of the value of reading not only with, but also to our kids.

A number of recent studies have reinforced the importance of reading aloud to your kids — the traditional way.

One such study evaluated the link between reading to children at a young age and later language development in school.

Brain imaging was used to examine brain activity in children as they were being read to by an adult.

The researchers found much greater brain activation in those children whose parents read aloud to them more at home.

This region of the brain that was being activated (part of the left hemisphere) is the same part that is activated when older children read to themselves.

And the kids whose parents had read to them more at home showed significantly more brain activity in the areas that process visual association — even though they were only listening to the story with no visual aids.

Researcher Dr. Hutton puts this down to the emphasis on imagination being necessary to interpret a story that is being read aloud.

For example, the child hears that a frog jumps over a log.

The thought process that follows is ‘I’ve seen a frog before, I’ve seen a log before, what does that look like?’

Evoking the powers of imagination while also making visual associations may help children to transition more quickly to independent reading of books without pictures.

It will also help them to be better readers later on, ‘because they’ve developed that part of the brain that helps them see what is going on in the story’.

Furthermore, reading to your children offers benefits in language development more than simply speaking with your kids.

Psychologist Jessica Montag says that this is because books contain ‘a more diverse set of words than child-directed speech’. So children are exposed to a more sophisticated vocabulary than they would be in their conversational interactions with adults.

Another study involving parents and children aged 10-16 months showed that both parents and kids used fewer words and vocalisations with electronic devices than they did with traditional toys.

Being read to also enables a more engaged and inquisitive experience with the reader.

The child can ask and answer questions, and make further visual and imaginative associations.

‘When a parent relates what’s on the page to the child’s experience, the child will have a richer understanding’.

This isn’t to say that interactive digital books don’t have value.

Especially in children with language delays, some features of the electronic books reinforce the connection between images and words.

And for the parents, these books can provide some ‘adult time’ to yourself, while your child is still participating in an educational activity on their own.

The downsides of electronic books, however, are that the abundance of animated images and interactive elements can get in the way of learning.

And of course, it adds to children’s already high exposure to ‘screen time’.

Ultimately, the research shows that kids learn better when an adult is involved.

Babies learn best by interacting with people rather than passively through a video or audio recording, as do preschool aged children.

And while these studies offer a lot of new research into childhood development, they speak to an ancient art, which has shown that ‘listening to speech is more spontaneously comprehensible and more linked to emotional brain centres [than reading]’.

After all, language comprehension evolved with listening some 150,000 years ago, while writing and reading are a comparatively modern practice at only 5000-7000 years old.

So while reading aloud to your kids is hugely beneficial for their own development, let’s not ignore the benefits it can have for parents — more quality, face-to-face, engaged (and often cuddly) one-on-one time with your child.