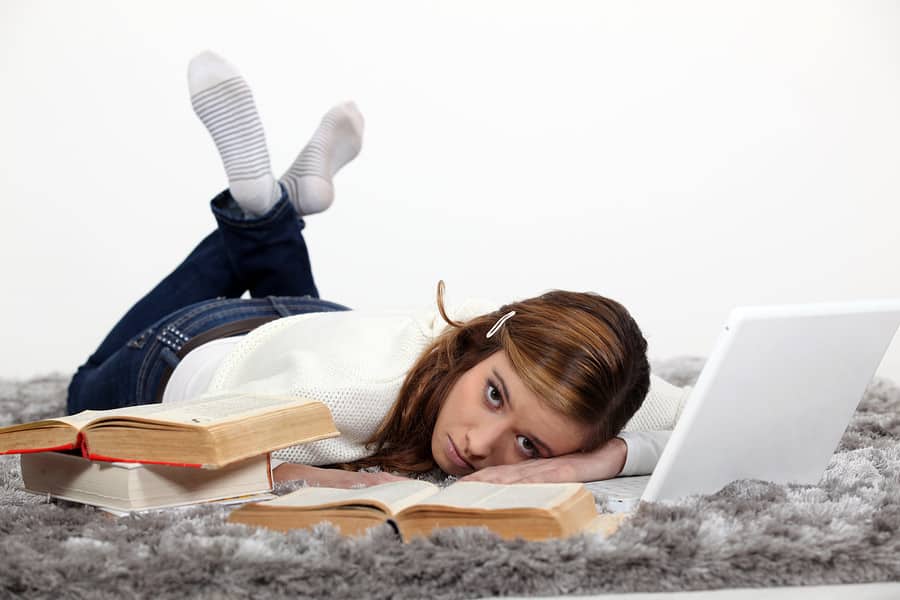 Many students across all levels of academic ability engage in “self-sabotaging behaviours”.

For example, the student who waits until midnight the night before an assignment is due before making a start. Then, when they receive a low grade, will shrug and say “oh well, I left it until the last minute”.

Now in some cases it is intentional but in many cases, it is driven by underlying issues such as anxiety.

Here are some of the most common self-sabotaging behaviours students engage in:

This is the student who spends so much time of the pre-planning stage of studying that it distracts them from the actual work.

By making sure that every folder is perfectly colour-coordinated, they’ve sourced the perfect highlighter and spent hours cutting and pasting information for flash cards…they engage in a lot of “pseudo-studying” to distract themselves from their anxiety.

This is the type of student who buys a beautiful journal but never writes in it for fear they will mess it up! Or they might rip out the first page just because their writing didn’t look good enough.

This student may come up with so many options for an essay topic that they spend days just trying to decide or over-research options instead of just picking one.

Does this sound familiar in your home?

If so, Educational Coaching might be helpful to improve motivation, organisation and time management skills.

Some students just seem to enjoy the adrenaline rush of pulling off a last-minute effort. They say they can’t seem to find the motivation to study or work unless there’s time pressure, and they get their best work done in the last “hour of power”.

(During my undergrad years I had a friend who – without fail – the night before an essay was due, would pop around and ask for the assignment sheet and reading list. Annoyingly, we often ended up getting similar grades!)

When you succeed under high stress conditions, it’s easy to gain such a sense of accomplishment that the idea of starting earlier seems like a waste of time…

Of course, the risk with the last minute rush is that you’re not fully allowing yourself to see what your potential is when you do allow more time.

And there will inevitably come a day when some other factor (such as a flat tyre, a printer that doesn’t work or an illness) will destroy the last minute strategy…

Educational Coaching sessions with a psychologist trained in Educational Psychology may also be helpful for students who struggle with this type of behaviour.

Some students are so afraid of failing that they engage in “failure-avoidance” strategies like procrastination and low effort. They tell themselves from the outset they will probably fail, and so they don’t try.

The usual outcome of this behaviour is low achievement, hence they manage to falsely convince themselves they were right about their initial instincts.

If they fail, they can then reason that they didn’t really try, didn’t care, or weren’t interested.

This is somehow more appealing than putting in an effort, giving it a go and then risking failure.

Put simply, defensive pessimism is a strategy where you hold yourself back and let others believe that you are lazy or unskilled, so you don’t have to be embarrassed about trying and not succeeding.

Educational Coaching is often beneficial for students facing this type of anxiety related to academic performance.

The “No Nose Student”

In other words, the student who is so determined to defy someone else they are willing to disadvantage themselves in the process.

This can be why some students seem to lag behind, or flat out refuse to complete work.

It can be due to a personality clash, or battle of wills with teachers or parents. Some students are simply very independent, strong-willed and don’t like being told what to do.

It can be hard for kids with these personality traits to blossom within an institutional environment like a school.

And for a very small minority of students who continually resist authority in any shape or form, this behaviour can be suggestive of a more concerning issue.

But with maturity it can be good for them to realise individuals can still grow and evolve by following instruction from others.

And let’s face it, the type of authority that exists in a relatively sheltered environment like a school can pale in comparison to a workplace…

So what about your son or daughter? Did any of these behaviours sound familiar?

Would you like them to learn how to get more organised, study more effectively, improve their test and exam taking skills and achieve better results?

If so, they may benefit from educational coaching.