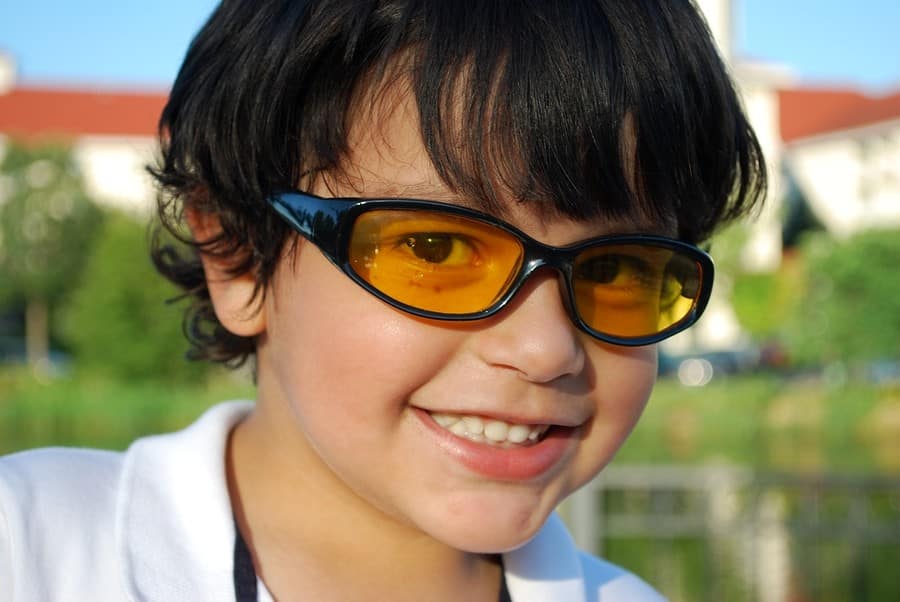 Parents who have watched their child struggle through reading, battling tears and tantrums at homework time are good targets for the promise of an all too easy cure with coloured lenses.

Marketers also know that this is the generation of parents who grew up listening to U2! (Bono is known for his use of coloured or dark lenses which reportedly ease visual sensitivities).

For the encore of a U2 concert I attended in 2006, Bono said that his father used to tell him to “take off those [stupid] glasses!”.

He then looked to the sky, removed his glasses, and the crowd roared.

However, in reviewing the evidence for the efficacy of coloured lenses for dyslexia, I think that Bono’s dad might have had a point…

The theory behind the use of coloured lenses for dyslexia is that reading difficulties are primarily caused by a visual-perceptual issue due to weaknesses in the magnocellular pathway of the visual system.

Proponents of this theory suggest that magnocellular cells are sensitive to coloured light (chiefly, yellow light).

People who have been ‘prescribed’ coloured lenses are often told that they have Irlen’s Syndrome (also known as ‘visual stress’ or Meares-Irlen Syndrome).

However, neither the International Classification of Disease (ICD-10; World Health Organisation) or the Diagnostic and Statistical Manual of Mental Disorders (DSM-5; American Psychiatric Association) list Irlen’s Syndrome (or any variant of it) as a recognised disorder.

These manuals are considered by most credible authorities, medical experts and government bodies to represent the “gold standard” of classification for these types of disorders, as they are based on the accumulated weight of scientific evidence from thousands of peer-reviewed research studies.

Similarly, neither of these diagnostic manuals make any reference to visual-perceptual distortions as a symptom of dyslexia.

The efficacy of coloured lenses as treatment for reading difficulties is also highly contested. Despite this, these filters have received regular mass media exposure and their use has been increasingly accepted in schools.

In all likelihood, this is due to (a) persuasive marketing, and (b) the fact that one of the key theorists (Stein) is associated with the University of Oxford (Dyslexia Research Trust).

Discerning parents need to be aware that most people who ‘prescribe’ coloured lenses for dyslexia in Australia are not actually registered health practitioners.

Appropriate diagnosis or treatment of dyslexia needs to be performed by a health practitioner who is registered with AHPRA, the Australian Health Practitioner Regulation Authority and qualified to perform specialised psychometric testing.

In most cases, this is going to be either a psychologist or an experienced educator who has postgraduate university qualifications in psychometric testing.

You can look up the name of the professional you are intending to visit on the AHPRA website. If you cannot find their name listed, it might be worth considering the reasons why.

When an assumed health practitioner’s profession does not fall under AHPRA regulated guidelines, it makes it difficult to determine the legitimacy and quality of services offered, and it also does not protect the consumer from potential harm.

What tends to occur is a placebo effect, whereby belief that a product will help is enough to give the user the impression of improvement.

Children are particularly vulnerable to the placebo effect because they naturally want to please us and give the ‘right’ answer.

It’s also been noted that many Irlen-based studies tend to only include individuals who have previously been using the lenses, meaning that results are biased towards finding a positive report (Albon, Adi, & Hyde, 2008).

What’s also puzzling from a scientific point of view, is that several Irlen studies overlook the importance of using a control group (i.e., comparing children with coloured lenses to children with just plain lenses).

Additionally, review of the statistical techniques used in such studies suggests that the authors tend to use methods that increase the likelihood of finding a positive result (Hyatt, Stephenson, & Carter, 2009).

This is sometimes referred to as ‘data snooping’ where a researcher simply picks the best results, and ignores or deletes the rest.

High quality evidence for a treatment needs to not only demonstrate improvement, but demonstrate that improvement is due to the specific consequence of the treatment, and not just by chance.

Other people who are not associated with that particular university, lab or sponsorship then need to be able to replicate the finding again, and again and again.

To date, research on the efficacy of coloured lenses for dyslexia has failed to do this.

Put simply, it seems unlikely that wearing coloured lenses would directly harm children who have dyslexia. But, if by going down this pathway it leads to a lack of appropriate interventions to support the child’s learning, then there is a clear potential for harm to occur indirectly.