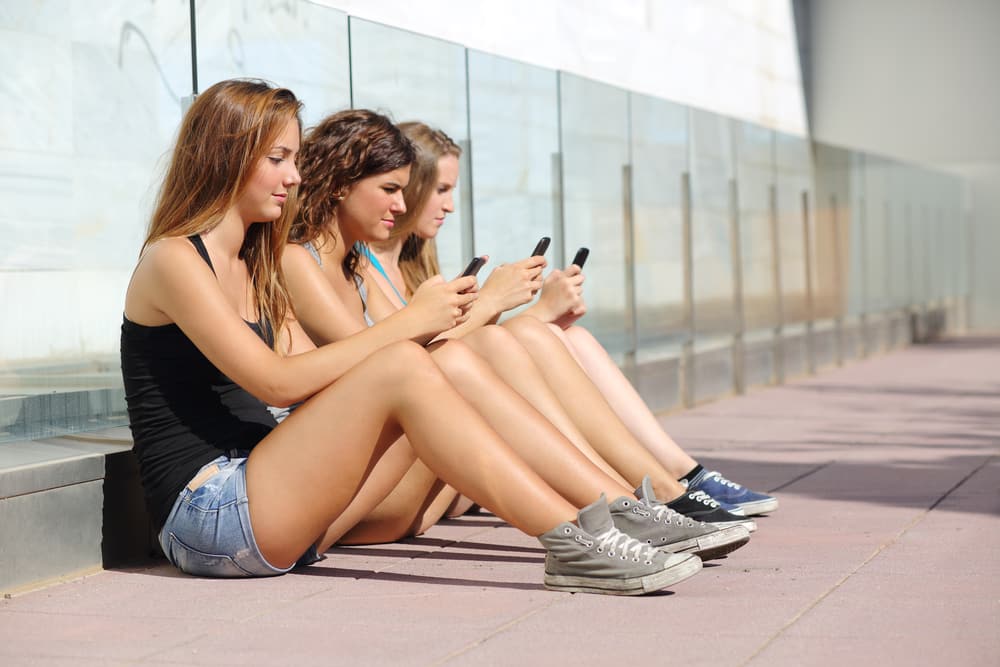 And the findings are both surprising and somewhat disturbing.

They come from psychologist Jean M. Twenge, who has been researching generational differences for 25 years.

For the majority of her career, Twinge noted that these differences changed relatively naturally and modestly.

‘I noticed abrupt shifts in teen behaviours and emotional states’, she explains.

‘In all my analyses of generational data—some reaching back to the 1930s—I had never seen anything like it.’

So what happened in 2012, to instigate such a sharp change?

It was the exact time that the proportion of Americans with smartphones rose to over 50 per cent.

And her further investigations showed that this was no coincidence.

‘The biggest difference between the Millennials and their predecessors was in how they viewed the world; teens today differ from the Millennials not just in their views but in how they spend their time. The experiences they have every day are radically different from those of the generation that came of age just a few years before them.’

She explains: kids born between 1995 and 2012 grew up with smartphones.

And they don’t remember a time before the internet.

As a result, it ‘has radically changed every aspect of teenagers’ lives, from the nature of their social interactions to their mental health,’ Twenge explains.

‘There is compelling evidence that the devices we’ve placed in young people’s hands are having profound effects on their lives—and making them seriously unhappy.’

So how is smart phone use affecting behaviour of teens today?

1. They go out and socialise less.

Twinge’s research found that year 12 students in 2015 were going out without their parents less than year 8 students were in 2009.

This, she claims, is because the ‘lure of independence’, typified of teenagers in past generations, has diminished.

Instead of going out, kids are staying in, and experiencing the world through the lens of their phones.

As a result, they’re engaging less in sexual activity, and teen birth rates in the US are at an all time low.

3. Learning to drive — a milestone in gaining adolescent independence — has also lost its appeal.

‘Teens described getting their license as something to be nagged into by their parents—a notion that would have been unthinkable to previous generations.’

Independence comes at a cost…

A cost which inspired former generations to work to finance their outings.

Not that kids are staying home more, they’re working less.

Kids need to experience adversity in order to overcome it.

It’s an integral part of developing coping mechanisms and life skills to deal with life’s many challenges.

But by avoiding the ‘real world’, kids aren’t facing the reality of these kinds of challenges.

‘There is not much adversity in your bedroom’, explains psychologist Dr Michael Carr-Gregg.

And social media use only inflates the problem.

‘We know from the research that the more you look at these things the more likely you are to self-objectify and not feel yourself worthy and compare yourself to other people. It dramatically reduces your sense of self-worth and your confidence to go out and take the world by the throat and live life.’

Overall, it seems that today’s teens are putting off the responsibilities — and pleasures — of adulthood for longer than ever.

Smartphones have enables kids to live their social lives through their phones, and are extending their childhoods as a result.

But if kids are essentially safer, by abstaining from ‘risky’ activities, why is this such a problem?

Because kids are suffering from higher rates of mental illness and unhappiness than previous generations.

While they may be home more, they are often still alone:

In their rooms, on their phones, and often distressed.

They’re not closer with their parents, because they don’t engage with them.

‘They just say “Okay, okay, whatever” while they’re on their phones. They don’t pay attention to their family’, explained one 13-year-old.

Social media has exacerbated feelings of loneliness and exclusion.

Girls are also more likely to feel left out than boys…

They don’t sleep as well, or for as long.

Teens who spend three or more hours a day on electronic devices are 28 percent more likely to get less than seven hours of sleep than those who spend fewer than three hours.

And teens who visit social-media sites every day are 19 percent more likely to be sleep deprived.

And since 2012 — the beginning of the ‘smartphone boom’ — 22 per cent more teens than before fail to get seven hours sleep.

Lack of sleep leads to a myriad of problems, especially for teenagers:

The Monitoring the Future survey, which has been questioning year 12 students for more than 30 years, has made the correlation clear:

And those who spend more time than average on non-screen activities are more likely to be happy.

Overall, the more time kids spend looking at their screens, the more likely they are to report symptoms of depression.

We all know that childhood and teenage years and formative in shaping adulthood.

But how can parents help to break these habits, when the lure of the phone screen is so strong?

For the same reasons that habits and personality are formed during adolescence, they are also the most malleable and adaptable.

Parents, by enforcing some slight rules and recommendations, can help their kids to avoid the pitfalls of the so-called ‘social media generation’.

You can do this easily — but significantly — by making certain situations ‘screen free zones’.

Meal times, car trips, and any family time are the best options.

In a similar vein — focus on family time.

Make together time an important focus of every day.

This is time for you to bond, and playing with phones while you’re doing it will just get in the way.

Simple things like going for walks, cooking dinner together, or cleaning up incorporate healthy habits with screen free times.

Talk to your kids, and listen.

Again, this is an extension of family time, but by really engaging with your kids they will have faith in you and feel comfortable you talking about their problems.

This way you will be more aware and atuned to the warning signs of anxiety, depression, or if they’re experiencing any challenges with school, work or social media.

Yes – school is more competitive and academically challenging than ever.

But work-life balance is something many adults struggle to achieve.

If they learn the value of work from an early age, they’ll be more able to manage it when they’re older.

And has the added bonus of forced screen-free periods.

If part-time work isn’t an option, get them to earn their pocket money (or even better – phone bill allowance) by extra household chores.

(This is distinct from standard chores – which kids should be expected, and not incentivised.)

And by implementing a daily routine, you can make it easier for them to adapt to no-screen times.

Make cleaning, homework, chores and meal times a structured framework for the rest of the day…

The whole family will benefit from this productivity.

And once again, there will be structured and consisted periods where phones are a no-go zone.

Routine also offers the safety, security and predictability that is lacking from youth social life – both online and in real life.

Parents are the most influential figures in their kids life…

If you are on your phone all the time, kids will think it’s acceptable to follow suit.

Monitor and minimise your own usage so that you’re setting a good example, and not sending mixed messages about what is and isn’t acceptable.

So let your kids make mistakes —

If they forget their lunch, they’ll go hungry.

If they forget their jumper, they’ll be cold.

They’ll be much more likely to not repeat the mistakes if they have to deal with the consequences, than if you fix the problem for them.

By teaching them the difference between reality and online representation…

And by encouraging them to talk to you if they see or experience anything that makes them uncomfortable.

But these problems are not insurmountable.

Like any new technology, it can take years for its negative (or positive) impact to be felt and identified.

And now that they are, parents can help to combat them.

If you are in Melbourne and would like some professional help with any of these issues, click the button below to book your initial parent consultation: