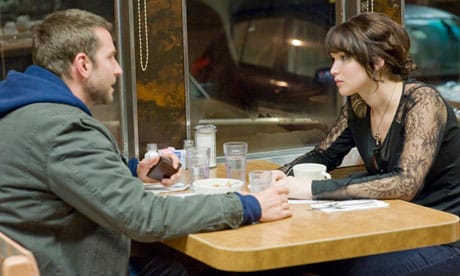 There has been a lot of buzz about Silver Linings Playbook. It has won a plethora of awards and has been nominated for eight Oscars. It has ignited debates about how mental health should be presented on the silver screen. The movie has also had far reaching impacts, as the director, David Russell, along with the lead, Bradley Cooper, have visited the US Vice President, Joe Biden, to help introduce a new mental health act in America.

What is the movie about? In a nutshell, Pat, who has bipolar disorder (also known as manic depression) is released from a mental health facility and returns to his family home in Philadelphia. Via his therapist, the audience discovers the trigger of his illness – his wife’s adultery. Pat begins his journey trying to win back the affections of his wife who has a restraining order against him. Along the way he meets Tiffany (who has recently been widowed) and they develop an interesting friendship which is peppered with funny incidents — including a very funny, awkward and embarrassing dance act at the end!

Mental health professionals have criticised the movie for trivialising mental health issues and for suggesting that all you need is love to heal mental illness (without medication). Although such criticisms might be fair to some extent, for the layperson, the movie gives a ‘flavour’ of what it is like to live with a mental health illness — for both the person with the illness and the people who live with them.

What is even more interesting is that, although the film is predominantly about Pat’s bipolar disorder, you also discover that other people in his life are suffering from a mental health illness. For example, Pat’s father (played by the brilliant Robert De Niro) has signs of Obsessive Compulsive Disorder as he has to have five remote controls in a particular position next to his armchair while watching his favourite football team play.

Pat’s friend, Tiffany, has issues of her own brought about from the recent death of her husband. Tiffany, played by Jennifer Lawrence, gives a touching performance when she tells Pat for the first time how her husband died.

[Incidentally, Bereavement Disorder is not included in the current Diagnostic and Statistical Manual of Mental Disorders (DSM-IV-TR), which is the psychiatrists handbook of classifications for mental health disorders. This has fortunately been revised for the upcoming DSM-5 which is due to be published in May, 2013. The DSM-5 will make the distinction between normal grief and more serious depression. This reflects the recognition that bereavement is a severe ‘psychosocial stressor’ that can precipitate a major depressive episode beginning soon after the loss of a loved one.]

The film highlights how mental health is really a continuum. On one end of the continuum Pat comes to terms with his bipolar disorder. On the other end, we have his mother, played by Australia’s own Jacki Weaver, feeling anxious and powerless. The film also subtly explores the stigma that exists around mental health.

Above all, the movie was engaging from beginning to end and well worth a watch.

Have you seen it? If so, leave a comment below and let me know what you thought.